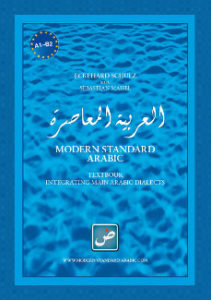 24 lessons with texts and exercises
detailed guidelines for teachers and students
listening, speaking, reading, writing
cultural and historical facts
various communication situations
vocabulary by frequency
usage-based, realistic grammar
diverse exercises with answer key
introduction into the comprehension of the main dialects
written tests after each lesson
intensive review after every 6 lesson
preparation for AL-ARABIYYA-TEST at levels A1-B2 (CEFR) or Novice High and Intermediate Mid-level according to the rating scale of the American Council of Teaching Foreign Languages (ACTFL).

Vocabulary and grammar are based on frequency analysis and communication requirements. The original texts were selected from various fields such as history, society, religion, politics, sports, science and culture.
This course is not about teaching what is rare and unnecessary, but rather focuses the fundamental aspects of communication.
Common Arabic linguistic terminology is used throughout the book enabling students to enroll in language courses in the Arab world and exploit other Arabic language sources.
Students will learn how to master different situations of communication. In addition, cultural, religious and historical information is conveyed in order to achieve cultural competence.
Special attention is given to repetitive and recurring expressions of both the written and spoken language, such as greetings, wishes, addresses, introductions, feelings, apologies as well as proverbs and stereotypical phrases.
Since no one speaks Modern Standard Arabic (MSA) as native language and communication is strongly influenced by local dialects, students must be proficient in comprehending expressions, phrases and entire conversations in local dialects. Thus, this textbook follows a new approach of incorporating Arabic dialects. Starting with lesson 4 all conversational texts are recorded in MSA as well as the dialects of four main regions:

While maintaining the original content, special features of the respective dialect are incorporated in order to express the content adequately. Gradually, students learn to follow conversations in the dialect. However, it is not intended that students will actively speak any Arabic dialect.
Using this textbook enables the student to reach Level A2 after finishing lesson 12 and Levels B1 – B2 after lesson 24 according to the Common European Framework of Reference for Languages (CEFR). This compares to the Novice High and Intermediate Mid-level according to the rating scale of the American Council of Teaching Foreign Languages (ACTFL).
There is a key with the solutions for those exercises which have only one correct solution: page 8 – 9

Additional materials will be offered under www.modern-standard-arabic.com